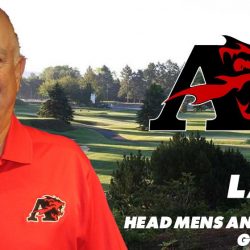 “We are excited for Eric to work with our golf programs.” said Ferry. “He had much success as a coach at Penn State Berks, and has a great vision for the program moving forward.

Lamm will take over for Bill Moyer, who will move to be an assistant coach for each team. Moyer served as the golf head coach since 2012.

In his last season with the Nittany Lions, Lamm assisted in leading the team to a second-place finish at the North Eastern Athletic Conference Championship. The 2018-2019 team recorded the six best scores in program history and three student-athletes earned All-NEAC First Team, Second Team, and Third Team honors.
During the 2017-2018 season, Lamm helped guide the team to their first ever NEAC Championship title leading to the program’s first trip to the NCAA Tournament. His team had one NEAC Player of the Year, one NEAC Rookie of the Year, one All-NEAC First Team, and one All-NEAC Second Team.
In Lamm’s second season at Penn State Berks, the Nittany Lions finished as runner-up at the NEAC Championship and took first at the NEAC Preview Round. His first season ended with the team finishing 7th place in the NEAC Championship.

“I want to thank Rick Ferry and the Albright Athletic Department for trusting me to lead the Lions golf program,” said Lamm. “I look to continue the success that the programs have built up from these past few seasons.”

A student-athlete at the University of Delaware, Lamm was a member of the Fightin’ Blue Hens 1977 East Coast Championship Golf Team. He also studied at the University of Virginia’s Darden School of Business and Penn State University’s Smeal College of Business. Following college, Lamm held a 33-year career in the specialty steel industry and was selected as the country’s “Top Salesman of the Year” by Purchasing Magazine in 1982.