Your Health Care Is in Women’s Hands 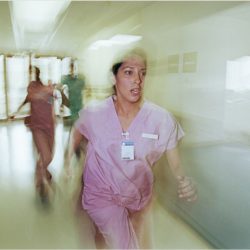 Women have driven 80% of the overall growth in the booming health care field since the turn of the century.

The number of full-time, year-round workers in health care occupations has almost doubled since 2000, increasing from 5 million to 9 million workers, according to the U.S. Census Bureau’s American Community Survey.

Since 2000, median earnings for women in health care have increased, in part from their growing numbers in higher earning occupations and longevity on the job.

This rapid increase is expected to continue, as many health care occupations are projected to grow even faster than average.

About half of full-time, year-round health care workers have at least a college degree, and almost a quarter have an advanced degree.

This often translates into earnings differences across occupations.

Combining the occupation entry-level education information from the Bureau of Labor Statistics with the data from the American Community Survey illustrates the relationships between education, occupation and earnings.

While women in lower education jobs have seen little change in their earnings, women moving into higher-education occupations have gained opportunities for higher earnings.

Women have increased their participation in record numbers in health care occupations that require higher education, including dentists, optometrists, pharmacists, physicians and surgeons, and veterinarians.

These occupations were dominated by men in 2000. Women now make up the majority of veterinarians and pharmacists, and have made strong gains, doubling their representation, in other occupations such as dentists and optometrists.

At the same time, the number of men who are dentists or veterinarians decreased over the two decades. Even so, today men still make up more than half of dentists, optometrists, EMT/paramedics, and physicians and surgeons.

In some health care occupations, such as nurse midwives, speech pathologists, dental assistants and medical assistants, women account for at least 90% of workers.

By far, the largest health care occupation is registered nurses, with over 2.4 million workers, followed by nursing, psychiatric and home health aides (1.2 million). Women make up more than 85% of workers in both of these large occupations.

There are about 763,000 physicians and surgeons working full-time, year-round and about a third are women.

Median earnings for women range from $172,000 for physicians and surgeons to $25,000 for veterinary assistants and laboratory animal caretakers.

Since 2000, median earnings for women in health care have increased, in part from their growing numbers in higher earning occupations and longevity on the job.

Yet, gains have been uneven.

As the nation’s population continues to grow older and demands for health care continue to increase, women working in health care occupations will likely play a key role in addressing these needs.

Statistics in this story are from the 2017 and 2000 Detailed Occupation Tables based on data from the 2017 American Community Survey.

Jennifer Cheeseman Day is a demographer in the Census Bureau’s Communications Directorate.

Cheridan Christnacht is a survey statistician in the Social, Economic, and Housing Statistics Division.