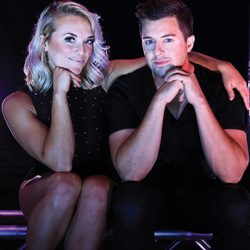 The Great DuBois, a fast-paced variety show including incredible feats of juggling, hula hoops, unicycle, aerial and circus stunts, contortion, magic, and audience interaction–all wrapped in a blanket of comedy–will come to Penn State Berks on Sunday, August 25, 2019, at 6 p.m. in the Perkins Student Center Auditorium. This event is free and open to the public.

Viktoria Grimmy is an award-winning fifth-generation circus performer who created circus acts for the Tony Award-winning Pippin. She has performed with the Big Apple Circus, Ringling Brothers, the Britney Spears Circus Tour, and was featured in the film Burlesque. Michael DuBois has been performing for the past 12 years, and has been featured on The Tonight Show with Jay Leno and the Late Night with David Letterman. He has performed at approximately 750 venues including colleges, cruise ships, theatres, and fairs all over the world. Both Grimmy and DuBois can also be seen in the 2017 film, The Greatest Showman. Joining together as The Great DuBois, they have created multiple shows, custom made for any occasion and sure to amaze every crowd.