Kutztown, PA (August 18) –  Despite their best efforts, Mother Nature once again defeated the management and staff of Championship Energy Action Track USA on Sunday, August 18. The season finale was rained out after 90% of warm-ups were completed. A total of nine racing events were presented at the Kutztown Fairgrounds oval in 2019, while seven programs were lost to bad weather. 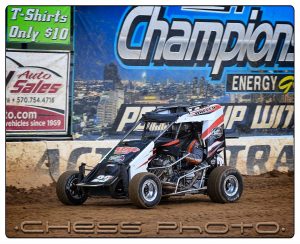 The rain out obviously ended the point chases, too, along with any chances of the point battles going right down to the final checkered flag. Earning this year’s titles were Billy Pauch Jr. (USAC All Pro SpeedSTRs); Kenny Miller III (Hyper Racing EVO Injection 600 Sprints); and Dylan Hoch (All Star Slingshots). On Wednesday, August 14, Kasey Hufcut clinched the Junior Slingshot point crown when that division ran its final race of the season at Action Track USA. 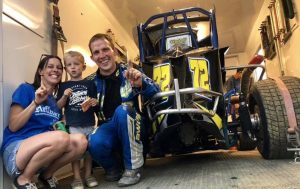 The SpeedSTR championship is the fourth for Pauch Jr., and second in a row. The Milford, NJ racer won three times this season and out-pointed Tim Buckwalter by 85 tallies to wrap up the point title. Pauch Jr. also won SpeedSTR championships in 2014, 2015, and 2018. Pauch Jr. remains the all-time Action Track USA win leader with 18 SpeedSTR triumphs, while T. Buckwalter is a close second with 16 career wins.

Miller, the college student who is about to begin his sophomore year at Millersville University, captured his first Action Track USA point crown on the strength of one win and consistent finishes inside the top ten. Kenny led the points until a bad night on July 31 dropped him to second behind Pauch Jr. In the 60-lap Fair National held on August 14 – that turned out to be the final race of the year – Miller rebounded to finish second while Pauch suffered an early exit and finished 26th. Miller hopped over Pauch in the standings and ended up beating last year’s 600 Sprint Champ by 81 points. There were eight different winners in the eight races held this season for the 600 Sprints.

Mertztown’s Dylan Hoch recorded his third track title in the All Star Slingshot division on the basis of four feature wins in the six races contested by the Slingers. Hoch, whose other Slingshot championships occurred in 2016 and ‘17, simply dominated the division in 2019. The only other drivers to register Slingshot victories were Tanner VanDoren and Scott Neary. Last season’s Slingshot point champion, Jared Silfee, wound up second to Hoch in this year’s standings, trailing the new champion by 195 points. Scott Neary was third in points, narrowly holding off Brett Bieber for that position. 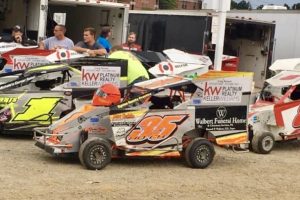 Fans who attended Sunday’s rainout can mail in their wristbands for a full refund or hang on to the wristbands until next year’s season opener, when they can be used for admission to the first race of the 2020 campaign. The address to which the wristbands can be mailed will be posted on the speedway’s website (www.actiontrackusa.com) and on its Facebook page (Facebook.com/ Action Track USA). If wristband is going to be mailed in for a refund, please remember to include a legible name and return address with the wristband.