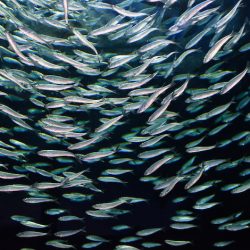 Forage fish attract larger predator fish, like striped bass, but they often wind up as the unintended bycatch in commercial fishing nets.

HARRISBURG, Pa. – Forage fish have been declining in Pennsylvania rivers, but a bill now in Congress could help restore their numbers. Shad, river herring and other migratory species return to rivers like the Delaware and Susquehanna to breed, but they live much of their lives in ocean waters – where vast numbers are swept up by commercial fishing operations, often in nets intended for other fish.

Current federal fishery management law doesn’t protect most forage fish from overfishing. That’s why Harold Daub, executive director at the Pennsylvania Federation of Sportsmen and Conservationists, said the Forage Fish Conservation Act in Congress is a top priority for his organization’s 57,000 members.

“If we remove so many river herring and shad when they’re out at sea, it means there’s less food available for predators like stripers and the other game fish that our membership likes to fish for,” Daub said.

HR 2236 would add shad and river herring to the list of managed stocks for the New England and Mid-Atlantic Fishery Management Council. The bill was introduced last spring. More information is available here.

The Pennsylvania Fish and Boat Commission was founded in 1866 – in part to restore shad to the Susquehanna River. Tim Schaeffer, the group’s executive director, pointed out controlling the catch offshore is critical to that effort.

“If we could have American shad and river herring considered on their own as a stock, rather than simply as bycatch, they could actually be protected accordingly,” Schaeffer said.

He added restoring forage fish also would benefit local communities that depend on fishing, wildlife tourism and seafood.

A diverse coalition of conservation and recreational fishing groups is calling for passage of the Forage Fish Conservation Act. And Daub noted lawmakers in the Keystone State are giving it their support as well.

“We appreciate that Representatives Fitzpatrick and Cartwright cosponsored the bill,” Daub said. “We sure would like to see the entire Pennsylvania delegation join them in supporting it.”

The bill has been referred to the Water, Oceans and Wildlife Subcommittee of the House Committee on Natural Resources.

Support for this reporting was provided by The Pew Charitable Trusts.