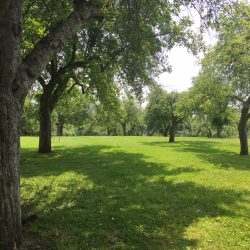 Beginning Saturday, August 31st, 2019, and continuing while the crop lasts, the apple orchard at Hopewell Furnace National Historic Site will be available for apple picking from 9:00 a.m. to 4:00 p.m. every day the park is open.  This will be the 33rd year the National Park Service has invited the public to harvest apples from the park’s trees.  The proceeds of apple sales go toward maintaining the orchard and other visitor services in the park.

Hopewell’s orchard has been found to be nearly as old as the iron furnace itself.   Mentioned in contemporary accounts as early as 1782, apple trees were planted, pruned and harvested yearly.  The orchard was replenished with new trees throughout the 19th Century and provided valuable food for furnace community residents, both man and beast.

The present orchard includes 30 varieties of apples, many of which are historic types that may have been found at Hopewell when the furnace was an active industrial site.  Early varieties such as Gravenstein and Summer Rambo were introduced from Europe by early settlers.  Others such as Jonathan, Stayman, and Pennsylvania’s own Smokehouse were “discovered” in America and became favorites during the 19th Century.  Some of these varieties are hard to find today since they are no longer raised by modern commercial orchards.  Also, Hopewell’s apples are of historic quality and taste by being allowed to grow and ripen without the use of applied herbicides or pesticides.

Due to natural cycles of the apple trees, please note that we do not have any of the early varieties for the 2019 season.

Persons wishing to pick apples should stop by the park’s visitor center to obtain a list of apple varieties and orchard map before beginning to pick.  Picking poles and buckets will be provided by the park.  Apples cost $1 per pound regardless of variety or quality.

Hopewell Furnace National Historic Site preserves and interprets an early American industrial landscape and community.  Showcasing an iron making community and its surrounding countryside, Hopewell Furnace was active from 1771 to 1883. The park’s facilities are currently open daily, 9 a.m. to 5 p.m. It is closed Thanksgiving, Christmas, and New Year’s Day.  Hopewell Furnace is located five miles south of Birdsboro, PA, off of Route 345.  Admission to the park is free.  For more information, stop by the park’s visitor center, call 610-582-8773, or visit the park’s web site at www.nps.gov/hofu