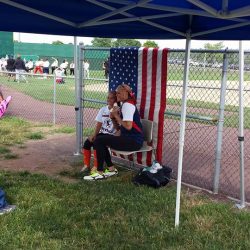 Finch is a former collegiate All-American, right-handed softball pitcher and firstbaseman originally from La Mirada, California. She pitched for the Arizona Wildcats, the USA national softball team and the Chicago Bandits. Finch won the 2001 Women’s College World Series and helped lead Team USA to the gold medal at the 2004 Summer Olympics and a silver medal at the 2008 Summer Olympics. Time magazine described her as the most famous softball player in history. In 2010, Finch retired from softball to focus on her family. In August 2011, she started work as a color analyst for ESPN doing National Pro Fastpitch and college softball games. She was inducted into the ASA/USA Softball Hall of Fame in 2016 and named youth softball ambassador by Major League Baseball in January of 2017.

“We love coming to BIG Vision every year and supporting what they do for youth.  We believe in their mission and this part of Pennsylvania is just beautiful.”  Finch said.

Jennie Finch Softball Camps offer instruction for all positions and aspects of the game. Camps offer each camper the opportunity to interact with and learn from some of the best softball players in the World.  In addition to Jennie Finch, her Olympic and Professional softball teammates, Leah O’Brien-Amico, Crystl Bustos and Toni Mascarenas as well as Finch’s father and personal pitching coach, Doug Finch will conduct two full days of personal instruction covering all aspects of softball. This is an amazing opportunity for young players to learn from the best and discover what it takes to be a Champion on and off the field.  The camp is open to girls ages 3rd grade and older.

On Saturday evening, Finch and her teammates will be attending the Champions Night of Fun fundraiser for BIG Vision Foundation at Ozzy’s Family Fun Center in Leesport.  Tickets for the event, which includes a meet and greet and Q & A session moderated by world renowned podcaster, Justin Schenk of The Growth Now Movement podcast are only $35 and the general public is invited.

Registration is still open for both the camp and the Champions Night of Fun. Registration for both events can be found at either www.JennieFinch.com or www.BigVisionFoundation.org/JennieFinch


Currently there are over 200 campers registered from 17 different states, but there is still space available for both the camp and the Champions Night of Fun.

“We love creating these types of opportunities for both young women and men in our community to interact with positive role models who will teach them both the skills of their respective games and even more importantly, life lessons.” Said Dan Clouser, President of the BIG Vision Foundation.

Mission Statement: The mission of BIG Vision Foundation is to:  develop today’s youth into tomorrow’s leaders through sports and community service;  promote volunteerism and giving back; and  drive our local economy. Our Vision: We impact millions of people, every year, through sports and community service, and we, as a premier sports destination, are a major economic driver in our community. About Us: By utilizing the three distinct pillars of our organization, we intend to build on the limitless nature of human potential by providing the opportunity to interact using sports, culture, and community service. Our goal is that our programs will unify our community through encouraging positive behavior and reinforcing life and leadership skills.

Through our youth programs, we develop individuals who desire to give back to their communities through serving others. Additionally, we strengthen their capacity building and decision-making skills.