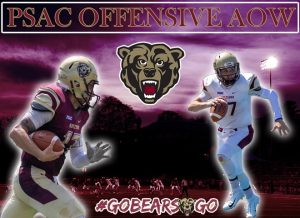 It was the sixth weekly honor for the Secane native.

Against the Greyhounds, DiGalbo threw for four scores and 263 yards on 16-of-23 passing, and added five carries for 89 yards and two touchdowns with his feet. He found seven different targets through the air, and connected with both Jack Pilkerton and Jake Novak twice for scores, the latter playing in his first collegiate game.

The 54 points marked an opening-game high in the Jim Clements era and it is the Golden Bears’ fourth-highest week one total all-time. Kutztown last exceeded 50 points in an opener back in 2012 when it went hung 58 on Saint Anselm in a runaway victory.

Kutztown will begin conference play on the road this weekend as it will take on California (1-0) on Saturday, Sept. 14, at 1 p.m.