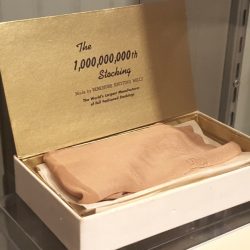 During its industrial peak in the early 20th century, countless textile mills operated in Berks County from small businesses to the most well known, Wyomissing Industries, which was the umbrella company for Textile Machine Works, Berkshire Knitting Mills and Narrow Fabric. Henry Janssen, Ferdinand Thun, and Gustav Oberlander united this effort.

These industrial titans were also largely responsible for the establishment and design of what is now, the Borough of Wyomissing, the first planned community in the United States.

Discover the Borough of Wyomissing and explore some of the architectural treasures of this historic neighborhood on the 4 Centuries in Berks Historic Property Tour on October 12th! Tickets now available online.

At its peak, it had on site a dispensary for its employees offering medical, dental and eye care.  The cafeteria could seat up to a 1000 employees and a small section was opened in another building to sell over-runs to workers and their families. Seeing its success, they decided to allow the public to buy directly from them.

Berkshire Knitting Mills was chosen by the DuPont Company to test a new material known as Nylon and they quickly adapted their machinery to its use. After 1940, most women’s hosiery was made from nylon. Wyomissing Industries published a newsletter for its employees from 1931-1957 called “The Yarn Carrier.” The following is a quote from the “Say” column of the Carrier from December, 1932: “What the world needs is a telephone bell that will tell who is ringing at the other end.”

For more of #YourBerksHistory visit us online!