Sing your Heart Out and Put on your Dancing Shoes…Genesius Theatre presents MAMMA MIA! 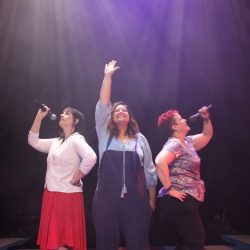 READING, PA – Join the more than 60 million fans of MAMMA MIA! when Genesius Theatre brings the story to the stage beginning on Oct. 11. The hilarious tale, based on the book by Catherine Johnson, details a young woman’s search for her birth father while on a Greek island paradise. Before wedding her fiancé Sky, she sets out on a quest to discover the identity of her father, bringing three men from her mother’s past back to the island they last visited 20 years ago. With music and lyrics by Björn Ulvaeus and Benny Andersson, some songs by Stig Anderson, and famous hits from ‘70s Swedish pop/dance group ABBA, you’re sure to be dancing (and singing along) in your seat.

Aside from its title number, well-known songs include the ever-popular “Dancing Queen,” “Take a Chance on Me,” “The Winner Takes It All,” “Super Trouper,” “S.O.S” and many more. MAMMA MIA! is truly a stage production of ABBA’s greatest hits. Deemed a “jukebox musical,” the production is free-spirited and fun, and certainly a must-see for fans of the group that inspired the show.

Playing Sam, one of Sophie’s possible fathers, is Christopher Sperat, also directing the production. With Genesius for 25 years now, he’s eager to perform his favorite ABBA number, “Knowing Me, Knowing You,” and says audiences can expect, “lots of fantastic singing, romantic liaisons, laughs-a-plenty, perhaps some sequins, scantily-clad beachcombers, professional state-of-the-art lighting and sound, and a full orchestra of some of the best musicians in Berks!” Who doesn’t love all of that? He recalls that after the tragic terrorist attacks of Sept. 11, 2001, MAMMA MIA! was the first musical to open on Broadway. “It was just what NYC (and the country) needed,” Sperat says. “It makes us smile and laugh. It makes us reminisce and encourages us to sing along. It sets out to do nothing but bring us joy and happiness, and it does just that – in spades.”

Emily Rhinehart plays Donna, Sophie’s mother. She started with Genesius about five years ago upon the encouragement of Sperat. She describes her MAMMA MIA! character as “a complete badass.” Says Rhinehart, “She is a self-made woman and has built her life upon not needing anyone to get by. It feels great to portray a strong woman.”

Speaking of strong women, much of the cast is comprised of such. Amy Bourey is one of the “Dynamos” of the show: Tanya. She explains, “She’s sassy and sophisticated and still knows how to party. She is also a loyal friend to Donna and Rosie (played by Becka Malanios) and would do anything for them.”

Malanios, who is sometimes on the behind-the-scenes side of productions at Genesius, enjoys taking the stage and the camaraderie of said Dynamos. She asserts that those in attendance will benefit from what cast members deem, “The Genesius Difference.” She explains, “From lighting, to sound, to set, to costumes and the cast, we will make you feel like you just stepped onto a Greek Island.”

A warning from Rhinehart though, “One hundred percent of attendees will have ‘Dancing Queen’ stuck in their head for the next week.”

Genesius is a 501-C-3 Non-profit organization. The theatre is located at 153 N. 10th St., Reading, PA, and is handicapped accessible. Free parking is available (limited spaces available) next to the theatre. For more info call the theatre at 610.371.8151.