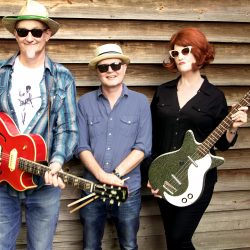 Reading, Pa. – The Reading Downtown Improvement District is bringing a little southern hospitality to tonight’s free Downtown Alive concert with Southern Culture On The Skids. The band will perform on the evening of Wednesday, Sept. 18 at 5 p.m. on the 500 block of Penn Street.

The trio joins a star-studded lineup of other performers that have taken the stage this summer. Southern Culture On The Skids performs right off the heels of The Revolution, which attracted over 3,000 fans to center city in mid-August.

The 500 block of Penn Street will be closed off to vehicular traffic to create a festival atmosphere that will include food trucks and alcoholic beverage vendors. A “kid’s play zone” will also be set up to entertain the young ones with face painting, balloon sculpting, and other activities.

Southern Culture On The Skids has been spreading the rock and roll gospel since they formed in Chapel Hill, N.C. in 1983. Guitarist/singer Rick Miller, drummer Dave Hartman and bassist/singer/heartbreaker Mary Huff “play a greasy mix of surf, rockabilly, R&B and country-fried garage with a side of psych,” according to their Facebook page.

The band has toured everywhere from the North Carolina Prison System to Mt. Fuji, Japan and deliver what Rolling Stone calls “a hell raising rock and roll party.”

Opening for the Sept.18 show will be Drew & The Blue, Reading’s very own popular surf/rockabilly trio.

The Downtown Alive outdoor concert season will wrap up on Saturday, Oct. 19 during the free block party that will kick off the Reading Royals hockey season. The party starts at 3 p.m. on the 700 block of Penn Street. Cracker will be the featured band with Talk Louder! as the opening act.

About the Reading Downtown Improvement District

Berks County Community Foundation is a nonprofit corporation that serves as a civic leader for our region by developing, managing and distributing funds to meet existing and emerging community needs. More information is available at www.bccf.org.