LOCK HAVEN, Pa. — Kutztown University junior Holly Owen was selected as the Pennsylvania State Athletic Conference (PSAC) Central Division Athlete of the Week on Tuesday after averaging better than 4.5 kills per set during a 4-1 week for the Golden Bear women’s volleyball team. 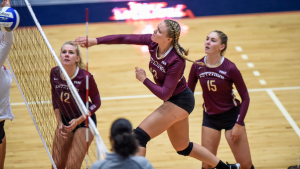 Owen, from Hatboro, racked up 82 kills, 23 digs and six blocks last week. Kutztown clicked off wins against Bowie State, Saint Michael’s, Salem and Goldey-Beacom, while delivering career win No. 600 to head coach John Gump during their its final victory of the weekend.

The outside hitter was outstanding in a 3-0 sweep of Saint Michael’s on Friday, collecting 16 kills and no errors on 28 attempts for a season-high .571 hitting percentage. Owen had 20 kills in a four-set loss to Notre Dame (Ohio) late Friday, before trying a career-high with 22 in a 3-2 comeback victory for KU against Goldey-Beacom on Saturday.

Owen also had 13 kills in a win over Bowie State and 11 in a sweep of Salem. She currently leads the PSAC in kills (132) and kills per set (4.55), while ranking third and seventh in those categories nationally.

Tuesday’s honor marked the second of Owen’s career. She was named PSAC Southeast Division Athlete of the Week back on Nov. 7, 2017, during her freshman season. Kutztown is in its first season as a member of the Central Division this fall.