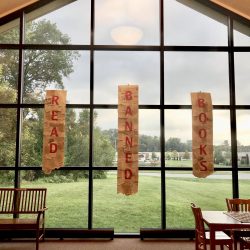 You’ve heard of them. You’ve probably even read a few. No matter who you are, you’ve most certainly had contact with at least one. The dreaded banned book.

The Handmaid’s Tale, Fahrenheit 451, The Kite Runner, To Kill a Mockingbird, 1984. Or more recently, The Hate U Give, Drama, Captain Underpants, This One Summer, Skippyjon Jones, Thirteen Reasons Why. Even though the range of subject matter and reading level differ immensely, these book titles share one common thread – they’ve been banned.

Despite the perception, not all libraries and librarians are on board with banning books, and Exeter Community Library (ECL) librarians challenge and encourage patrons to borrow books, audiobooks, and movies that have achieved banned status in many places around the country. In fact, they’ve even dedicated an entire display to banned materials.

After the 1982 Supreme Court case (Island Trees School District v. Pico) which ruled that school officials can’t ban books in libraries simply because of their content, The American Bookseller’s Association, the National Association of College Stores, and the American Library Association (ALA) collaboratively launched Banned Books Week. The event takes place the last week in September with the goal of raising awareness of books banned in schools and libraries across the country.

Even with the Supreme Court ruling against censorship, the ALA’s Office for Intellectual Freedom still receives dozens of reports today from libraries, schools, and the media on attempts to ban books in communities across the country. According to the ALA, those most often to initiate bans on books are parents, librarians, and library patrons.

Exeter Township resident and library patron Tacy Rutherford says she and her family make a point of reading a book when it’s been banned. “Freedom means I won’t agree with everyone and everyone won’t agree with me,” she says.

At the Exeter Community Library, books like On the Come Up, Twilight, Harry Potter, I Am Malala, Maus, Fangirl, and so many others are on display front and center in the main library. It’s part of an effort to encourage everyone to “keep the light on by standing up to censorship.” As the ALA states, “Censorship leaves us in the dark.” ECL librarians hope everyone in Berks County will visit during Banned Books Week, borrow a banned book or movie, and share it with the world.

Banned Books Week for 2019 is September 22-28. The Exeter Community Library aims to serve the community as a center of learning, accessible recreation, practical tools, and nearly 500 free programs designed for children and adults to participate in throughout the year. For hours of operation, visit www.berkscountylibraries.org/exeter.