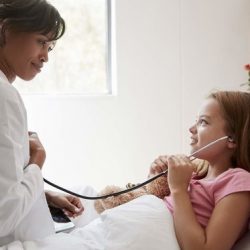 About 4.3 million children did not have any health insurance coverage in 2018, an increase of 425,000 (or 0.6 percentage points) from the previous year, according to the U.S. Census Bureau’s annual Health Insurance Coverage in the United States: 2018 report released this month.

Children obtain health insurance coverage from a number of different sources. Many have coverage through a parent’s private plan, and many lower income children may qualify for certain public programs, such as Medicaid or the Children’s Health Insurance Program (CHIP).

The new report highlights that 5.5% of children under the age of 19 were uninsured, largely because of a decline in public coverage.

Taking a closer look at children’s coverage highlights some key changes in coverage between 2017 and 2018 by coverage type and by age, region and income-to-poverty status.

Decrease in Medicaid and CHIP Coverage

Most of this decrease was because children’s Medicaid and CHIP coverage rates declined. In 2018, 35.3% of children had Medicaid or CHIP, compared with 36.5% in 2017.

Both of these programs target low-income children.

Medicaid and CHIP are separate programs, but we cannot disentangle these types of coverage from each other or from other types of medical assistance programs reported in the Current Population Survey Annual Social and Economic Supplement.

Rates of insurance coverage overall, and Medicaid and CHIP coverage in particular, did not fall equally for all children.

For example, Medicaid and CHIP coverage fell for the youngest children (under 6 years old) and for 6-to-11 year-olds, but did not statistically change among 12-to-18 year-olds.

The uninsured rate also rose for children under 6 years old and for 12-to-18 year-olds.

The change in the Medicaid and CHIP rate also varied by household income-to-poverty ratio.

As noted earlier, Medicaid and CHIP both target low-income children. Although none of the groups experienced a statistical change, there were differences from one income-to-poverty group to another.

Another way to think about geography is to consider whether a child lives in one of the 31 states (or in the District of Columbia) that expanded Medicaid eligibility as part of the Affordable Care Act (ACA).

This was the opposite of what happened for coverage overall. The percentage of children without any health insurance increased in nonexpansion states, but did not statistically change in expansion states.

The CPS ASEC microdata, also released today, allow data users to take a closer look at other types of coverage and other age groups.