DiGalbo, Vasger Recognized as PSAC East Athletes of the Week 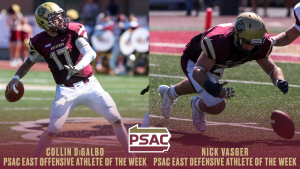 DiGalbo’s honor is his second in the opening three weeks of the season and seventh career. The fifth-year senior quarterback went over 7,000 career yards passing and moved into third among KU’s career completions leaders (561) by completing 25-of-32 passes for 316 yards, two touchdowns and an interception against the Golden Knights. He also ran for 98 yards on 16 carries, scoring three times. DiGalbo tied his own program single-game record for rushing touchdowns by a quarterback.

Vasger recorded 1.5 sacks, 3.0 tackles for loss and recovered a fumble against Gannon. He was disruptive to the Golden Knights’ offensive game plan all afternoon, as were his KU teammates. Vasger finished with four tackles on the day and his three tackles for loss cost Gannon 14 yards.

The junior defensive end from Hatfield teamed up with Eric Miller to bring down Gannon quarterback Jimmy Keefe in the backfield late in the first quarter. Midway through the fourth he dropped Keefe for an eight yard loss on a solo sack.

Vasger also recovered a fumble at Gannon’s 10 on the Knights’ first possession of the second half, which was set up by a Togba Porte II sack and forced fumble –one of six sacks for the KU defense on the day. The Golden Bears scored off the turnover to go up 28-3.

The weekly honor is the first of Vasger’s career.