Groovemasters, Uptown Band teaming up for “The Alisa B. Memorial Funkfest” 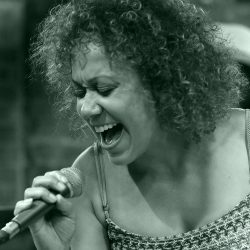 A portion of the proceeds benefits the Alisa B. Anderson Memorial Scholarship Fund with the Reading Musical Foundation

On Friday October 11, 2019, The Groovemasters ft. Bennie Sims and Cliff Starkey and Erich Cawalla’s Uptown Band will again team up for an event that is near and dear to their hearts – “The Alisa B. Memorial Funk Fest” to benefit The Alisa B. Anderson Memorial Scholarship Fund with the Reading Musical Foundation. This annual event began in 2013 and until last year, was held yearly at First Energy Stadium. In 2018, the Crowne Plaza hosted the event, and this year, the event will be held at the Goodwill Beneficial Association Ballroom located at 100 Madison Ave., Reading PA. It was originally the idea of Reading Fightin’ Phils’ hard-working staff member Todd Hunsicker as a means of bringing the community together to support The Reading Musical Foundation. Established in 1926 by a team of local music enthusiasts who recognized the importance of ensuring our community’s cultural health, RMF has been supporting music education, preservation and local music presenters for nearly 90 years. Their dedication, passion for music and our community, and willingness to “play” by working hard set the standard for RMF and is a foundation that both The Groovemasters and Erich Cawalla’s Uptown Band strongly believe in and support.

Alisa B. Anderson was one of the most-talented vocalists and musicians to ever come out of Berks County PA, performing throughout the country with many groups, most notably the legendary Berks County-based Groovemasters. Alisa B. was diagnosed with Stage 4 stomach cancer late 2014, but strongly fought the disease to the very end, performing her shows with grace and dignity until she ultimately lost her battle shortly before the 2015 Funk Fest. Since 2015, the event has served as a tribute to Alisa B.’s immensely talented and energetic soul, with each band performing a tribute to her and teaming up at the end of the night together on stage.

In many ways, The Uptown Band and The Groovemasters are tightly knit at the seams. Besides being the leader and visionary of The Groovemasters, Bennie Sims serves as both The Uptown Band and its leader, Erich Cawalla’s original music producer. Along with Cliff Starkey, they have performed for or with numerous celebrities including President Bill Clinton, Dizzy Gillespie, The Temptations, Al Jarreau, Tower of Power, and Tavares to name a few. Their talents have been showcased nationally on “Good Morning America’, “The Emeril Live Show” (where Cliff served as the house piano player for 9 years and appeared on the Rachael Ray Show in 2016), and on a 2002 PBS Special called “Love, Rhythm, & Soul” featuring Aretha Franklin, Lou Rawls, and The Spinners. Sims was the musical director for the legendary Three Degrees for over 25 years. Both continue to perform nationally and internationally with these and many other artists. Sims has also written and performed with Smooth Jazz legends Pieces of a Dream.

Since the band’s inception during the Berks Jazz Fest 2006, Erich Cawalla’s Uptown Band has become one of the busiest bands in the Northeast. With the release of their debut original CD “Waiting for Her” and sophomore release “Heart, Soul, Body, & Mind”, they have grown beyond their regional roots and have become known nationally and internationally. Their original songs have been played on a wide variety of radio stations throughout the world and have charted as high as #9 on the Groove Jazz Chart and #27 on USA Today’s Contemporary Jazz Chart. TV-wise, they have performed twice on NBC New York’s former Late-Night talk show “All Night with Joey Reynolds” and just recently, made cameos on national TV on ABC News’ “This Week with George Stephanopoulos” and the former talk-show “The Chew”. They continue to be a featured act a countless shows throughout the United States.

Tickets for this event are $15.00 at the door or $12.00 ahead of time, with food and drink available from The Goodwill Beneficial Association. Doors open at 7:00 PM with bands performing 8:00 PM – 11:30 PM. For more information in purchasing advanced wrist-band ticketing, call (610) 781-8312 or email [email protected] This is an ALL AGES show because of the amazing connection Alisa B. had with the children that she taught.