READING, Pa. – Two conference champions, an All-American football player, and a three-time All-Conference First Team performer headline the Albright Hall of Fame Class of 2019. Albright College enshrined Angela Bretz, David Ciccone, Trevor Deeter, and Eric Nemec into its Athletic Hall of Fame during a special reception and dinner in the Schumo Center on the evening of Friday, Sept. 27. 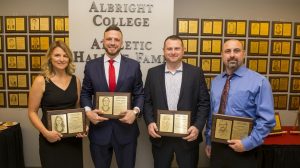 The 2019 Hall of Fame class joins more than 100 Lions from 150-plus years of athletics competition who have excelled in their sports while at Albright College.

Angela Bretz ’99 was a member of the Albright women’s swimming team. She became the first swimmer in Albright program history to qualify and swim at the NCAA Division III Championships in March of 1996. Bretz was also a two-time gold medalist at the MAC Championships during her swimming career as she won the 100 butterfly in 1999 after winning gold in 1998 with the Lions 200 freestyle relay team. Bretz still ranks in the Lions program Top-10 for three different events. She was named Albright’s most outstanding swimmer in 1996, and the Most Outstanding Albright Senior Female Athlete in 1999.

Following her graduation from Albright, Bretz earned her Master of Science in Chemistry at the University of Virginia, and currently serves as a research scientist at the Genomics Institute of the Novartis Research Foundation in California.

David Ciccone ’04 made his mark on the Albright baseball program record book during his four years with the team. He started all four years at shortstop, and was a three-time All-MAC First Team Selection.

Ciccone holds the Lions program all-time record in career home runs with 22, and also holds the school record for most home runs in a single game with three back against Gettysburg in 2002. He was named the Most Outstanding Albright Baseball Player in 2002 in addition to serving as a team captain for two seasons. Ciccone currently serves as a National Recruiting Director for Alteon Health.

Trevor Deeter ’06 was one of the most dynamic players in Albright men’s basketball history. Deeter was a three-time All-MAC Commonwealth First Team Selection, and earned First Team ESPN The Magazine College Division Academic All-District Honors in 2005 and 2006.

Deeter currently serves as a realtor at HomeStarr Realty.

Eric Nemec ’99 was a member of the Albright football team during his four years in Reading. Nemec was a one of the most decorated wide receivers in the program’s history as he was named a Second Team All-American by Don Hansen Football Gazette in 1997. Nemec also earned Preseason All-American Honorable Mention from the Don Hansen Football Gazette in 1996. He was a two-time All-MAC First Team selection, and a second team selection in 1995.

Nemec once held the NCAA Division III freshman record for receptions in a single-season, and ranks second in program history in five statistical categories. He also ranks in the top-five in Lions football history in scoring, and is still the school leader for touchdowns scored in a single-game. Nemec helped the Albright football team win a pair of MAC Championships in 1996 and 1997 in addition to leading them to a NCAA Division III Tournament appearance in 1996.

Nemec currently serves as a Body Shop Manager for the Faulkner Dealership Group.