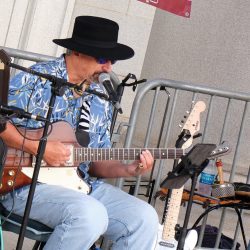 Here’s the link to preview or download the song.  The recipe called for a little bit of Buddy Holly, a dash of Jerry Lee Lewis, a gob of Rocky Horror Picture Show, and a couple of Stray Cat vibes!

See more on the Busker Incognito Facebook page.  Busker Incognito & The Hollow Wieners, along with MO7S, will be opening for New York’s Lara Hope & The Ark-Tones at the Rock-A-Billy Monster Mash dance and concert event at the Evergreen Club on Thursday, 10/24/19, Fleetwood, PA, starting at 6pm.  The new song and band, along with MO7S and Lara Hope & The Ark-Tones will also be featured on this week’s Come On In My Kitchen show. Here’s the show link https://www.podbean.com/eu/pb-tfm6x-c1ac84

Work is now being done to find and collaborate with a choreographer, dancers, set, costumes, makeup, director and video producer to bring the song to life.