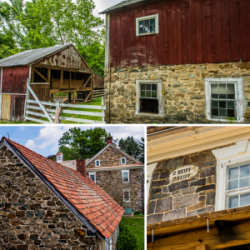 to Commemorate Its 150th Anniversary

Starting in 1904, the Historical Society of Berks County organized community “pilgrimages” to historic sites around Berks County. The Berks History Center continues this tradition today with a special 150th Anniversary event, the Hidden Treasures of the Oley Valley on October 26, 2019 from 1pm-4pm. Join the Berks History Center as they commemorate 150 years of preserving and sharing Berks County’s history with this special “throwback” historic property tour.

During the Hidden Treasures of the Oley Valley event, participants will have the opportunity to explore two unique Oley Valley properties, the historic Reiff Farm and the newly renovated Hartman Farm. The event includes a visit to Berks County’s oldest tree, the Sacred Oak, which is located on the Hartman Farm property. Participants will also enjoy a tasting of local Berks County foods including products from:

The Historic Reiff Farm was settled in 1709 by Phillip Kuhlwein and his wife. With over 1,100 acres, it was the largest farm in the Oley Valley during the colonial era. Kuhlwein was succeeded by his son-in-law and heir, Conrad Reiff. Greatly reduced and now comprising 50 acres, the Reiff Farm was owned by two generations of the Moxon family from 1943 until early 2014. The historic farm complex was listed on the National Register of Historic Places in 1980 and includes a 1740 forge and log house, as well as six, recently restored, early out buildings. The two-and-a-half story stone home on the farmstead was built in 1815 by Conrad Reiff, II and his mother, Catherine. The current property owners have embarked on a comprehensive historic restoration project on the property, which is now finished and ready to be viewed along with the neighboring Hartman Farm property during this special event.

The Hartman family purchased their 94-acre farm property in 2013, and with it, they inherited an historic, but dilapidated, farm house as well as Berks County’s most treasured tree, the Sacred Oak. The Sacred Oak of Oley is a true state champion, largest known of its species anywhere in Pennsylvania.  As the new caretakers of this community treasure, the Hartman family entered into an agreement with Oley Township to provide for public access and preservation of the tree. The farm house was constructed in 1860 by Jacob and Catherine Hoch, whose family has been a large part of the Oley farming community for many generations. According to its date stone, the barn was built by Jacob and Catherine Hoch in 1862, and rebuilt in 1876.

The entirety of Oley Township is listed as a historic district on the National Register of Historic Places. By ordinance, no structure built before 1940 can be demolished without Township approval. Oley prides itself on its historic preservation efforts, and values its old structures. Inspired by their new community, the Hartman family conceived a plan to move the old farm house, which was in desperate need of repair, to the far side of the barn. In September of 2013, a large crowd assembled at the farm to witness the moving of the house to its new location, which provided a reprieve from the noise and traffic of Friedensburg Road and helped to elevate the house, allowing collection and drainage by gravity of groundwater from around the footers of the new foundation to the nearby creek.  The house was rotated 180 degrees from its original orientation, and placed in close proximity to the barn. Over the next 2 years a modern house was constructed within the brick walls of the 1860 house. The Hartman family welcomes participants to tour the newly renovated home and visit the Sacred Oak.

The Berks History Center invites you to explore the history and architecture of these two properties on the Hidden Treasures of the Oley Valley tour. This event will be held rain or shine on October 26, 2019 from 1pm-4pm. A special hayride will be available, weather permitting.

Tickets are $15 per person. Children 10 and under are free. Tickets can be purchased in advance by calling 610-375-4375 or online at www.berkshistory.org/event/hiddentreasures/