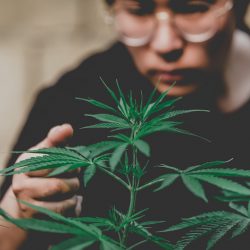 SB350 has provisions to help low-income people with past marijuana convictions participate in the recreational marijuana industry.

HARRISBURG, Pa. – Two state senators have introduced a bill that some are calling a model for recreational marijuana legalization.

Senate Bill 350, introduced this week by Sen. Sharif Street, D-Philadelphia, and Sen. Daylin Leach, D-Montgomery, is being hailed as one of the most far-reaching legalization bills introduced in any state.

It would allow people to grow up to ten plants for personal use, get home deliveries from dispensaries, and help communities most affected by decades of prohibition reap the economic benefits of legalization.

Matt Sutton, director of media relations for the Drug Policy Alliance, says it would generate $450 to $500 million in tax revenue in its first year.

“The first 5% of that is going to pay for administrative fees and regulation enforcement, training programs,” says Sutton. “The remaining 95% would go to public education.”

Opponents of legalization see marijuana as a “gateway drug” that leads to use of other, more dangerous drugs, but Sutton says there is no evidence to support that claim.

Some states have included provisions to allow people with past marijuana-related convictions to apply to have those records expunged. Sutton notes that SB 350 goes a step further.

“It does have automatic expungement,” says Sutton. “Which is really good because there’s so much damage that’s been caused by prohibition that we can’t just go forward without looking back.”

People with past convictions on the books can be denied access to public housing, student loans and employment, and may have lost homes and families while serving prison time.

While Sutton gives the bill high marks, he feels the money generated by the sale of marijuana could be more widely distributed.

“It is a little concerning to see that they’re not using any of the marijuana tax revenue to curb the overdose epidemic in Pennsylvania, because it is definitely needed in the state,” he explains.