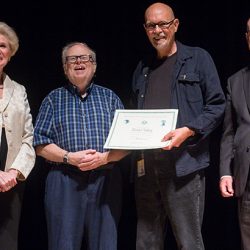 The lecture will feature screenings of three short video documentaries, which Talley calls works in progress that he is making to accompany an upcoming retrospective exhibition. Each film will be followed by audience questions and discussion.

The exhibition, also titled State: Obvious/Not So, will be featured in Albright College’s Freedman Art Gallery, January through March 2020. The films and their featured works honor Talley’s 46 years as an artist, arts educator, curator and critic. Talley hopes audiences can gain insight into the interrelationships and arc of his work over the span of his continuing career.

Talley is the 2018 winner of the KU Chambliss Faculty Research Award. The Chambliss Award, inaugurated in 2004 through a gift from Dr. Carlson R. Chambliss, professor emeritus, is meant to recognize the very highest achievement in research and scholarship and can be awarded only once in a person’s career.

On the art scene since 1973, Talley received his MFA from the University of Hartford and his BFA from the Atlanta College of Art. His artwork focuses primarily in various iterations of photography and have been exhibited in galleries, museums and alternative venues nationwide. His writing has been featured in a variety of publications including Sculpture Magazine, New Art Examiner and Ceramics Monthly. Talley co-founded several arts organizations including Art Papers Magazine, in its 40th year of continuous publication, and Real Art Ways. Now a professor at Kutztown University, he teaches digital photography, a course in photobooks, time-based media and professional practices.