KUTZTOWN, Pa. – Senior goalie Kerri Hanshaw of the fourth-ranked Kutztown University field hockey team was instrumental in KU’s upset win over No. 3 Millersville last Thursday night. She made five saves during the 80 minutes of action that kept the Marauders off the board, and then came up huge in the penalty shootout, stopping four-of-five Millersville attempts, allowing KU to win the game 1-0 (2-1 in the shootout). 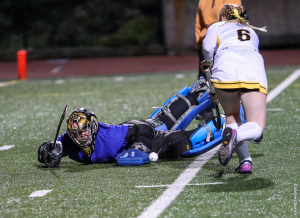 For her stellar play in front of the cage, Hanshaw earned Pennsylvania State Athletic Conference (PSAC) Defensive Athlete of the Week honors, as announced by the league office Tuesday. It is her first weekly award of her career. Kutztown now has two Defensive Athletes of the Week as junior defender Leigh Roselli was recognized back on Sept. 17.

It was the first victory for the Golden Bears (9-4 overall, 4-2 PSAC) over the Marauders (10-3, 2-3) since Oct. 8, 2011, and the first penalty shootout win for KU since Oct. 30, 2010. It all happened after 80 minutes of play and a 1-1 score in the shootout with the clinching shooters up. Molly Bobjak stepped up and delivered. Hanshaw followed suit to preserve the victory.

The Collegeville native has started in three games this season and has a career-high with 19 saves through seven games played. Her .864 save percentage is second-best in the conference.