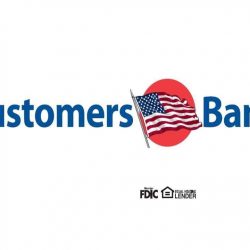 Wyomissing, PA  – The Executive offices of Customers Bancorp and its subsidiary, Customers Bank, will move to a new location in nearby West Reading Borough that affords more space and increased amenities for the fast-growing financial services business, announced Chairman & CEO Jay Sidhu.

Some support teams currently working in other space around Berks County will be consolidated to the new location. The move is expected to be completed by the end of the first quarter of 2020.

The move of less than one-half mile from Wyomissing to neighboring West Reading reflects the bank’s commitment to its roots in Berks County, said Sidhu, but also to its team members. This move will not disrupt the commutes and daily routines of our team, but it will put them in a larger, more open, and more collaborative space with ample parking and walkable amenities like restaurants, drug stores, boutique shops, coffee shops, and upscale afterwork venues, explained the chief executive.

The bank and its holding company will be moving their offices from 1015 Penn Avenue, Wyomissing to 701 Reading Avenue to the first floor of the structure built in 1928 to house the Narrow Fabric Building Industries Corp. The bank will lease about 29,700 square feet to provide work and meeting space for over 175 executive and administrative team members, “hotel space” for visiting team members based elsewhere.

The bank has leased the space for five years with an ability to renew in five-year increments for an additional 10 years. The lease price was not disclosed.

The Customer Bank branch located on the ground floor at 1001 Penn Avenue will remain at its present location for the foreseeable future, reported Sidhu.

The West Reading building is owned by Narrow Holdings, a firm created by Kevin Hughes, a Wyomissing resident and president of Longview Construction Co., 328 Buttonwood Street, Reading. The Loft at the Narrows, 99 luxury apartments, occupy the second, third and fourth floor of the building. A restaurant, the B2 Bistro + Bar, recently opened on the first floor.

Customers Bank was created during the financial crisis in 2009 from the troubled assets of several small banks. Today, Customers Bank has assets just under $10 billion and a footprint that spans from Washington, DC to Boston; and an additional office in Chicago.

Other businesses locating in the same vicinity include UGI Energy Services and Tower Health both of which are opening offices in the renovated structures that were once the Vanity Fair outlets.