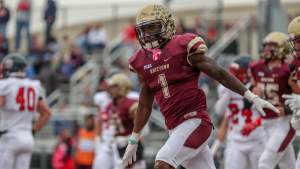 The redshirt senior’s first touchdown of the afternoon, late in the first quarter, put him over 1,000 career yards rushing. Neblett expanded Kutztown’s 14-2 lead in the second with two touchdown runs of 50+ yards on back-to-back offensive plays.

Neblett is the first Golden Bear to rush for 200 or more yards in a game since Craig Reynolds ran for a school record 261 against East Stroudsburg in 2016. Neblett’s four touchdown runs are tied for the second most in a game in school history and were also a program first since Reynolds ran for four against Millersville in 2016.

Neblett currently leads the PSAC and ranks sixth in NCAA Division II with 7.65 yards per carry and is the PSAC’s sixth leading rusher overall.

The weekly honor is the first of Neblett’s career and marks KU’s third Offensive Athlete of the Week this season. The Golden Bears have claimed seven weekly awards between offense, defense and special teams this season during the second best start in school history (8-0).

The unbeaten Bears travel to nationally-ranked West Chester on November 2 at noon, where they can claim the PSAC East title with a win.