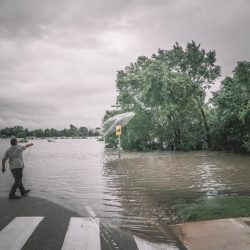 Changing seasonal weather, severe storms, drought and flooding are affecting businesses of all types in the Keystone State.

PITTSBURGH – Companies doing business in Pennsylvania are warning investors that climate change is a threat to productivity and profits.

President Donald Trump attended an event sponsored by the natural gas industry in Pittsburgh on Wednesday, where he celebrated beginning the process of withdrawing the country from the Paris Climate Agreement.

However, methane, the main component of natural gas, is responsible for one-quarter of the greenhouse-gas pollution that leads to climate change, and a new report from the group Business Forward has said that is having a major impact on the Keystone State’s economy.

According to Kjerstin Klein, owner of Willi’s Ski and Board Shops, it’s already affecting her business.

“Over the 50 years that we have been in business,” she said, “there is a distinct trend of winters starting later and ending earlier.”

The report, featuring 19 of the state’s 20 Fortune 500 companies, outlined the effects of climate change on businesses, from agriculture to transportation, as well as on infrastructure.

Klein said small businesses are much more vulnerable to serious consequences from the increasing frequency of severe weather events brought on by climate change.

The report said Pennsylvania has had $18 billion of weather- and climate-related disasters since 2014.

Scientific evidence overwhelmingly points to human activity as a major factor driving the warming climate, but many people question the cause – or that it’s happening at all. Klein said she hopes this report will deliver a clear message that the time to act is now.

“Stop with the denials,” she said, “Let’s start working on some solutions, because it is having an impact now that is being felt at the individual level.”

The report is online at businessfwd.org.