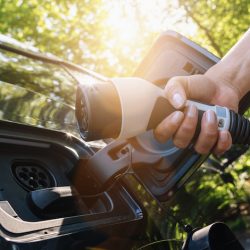 Some experts are convinced that slowing climate change will require a rapid transition to electric vehicles.

Senate minority leader Charles Schumer of New York has proposed a sweeping measure that he says could take 63 million gas-guzzlers off the road by 2030 and replace them with electric cars.

According to Luke Tonachel, director of the clean vehicles and fuels group at the Natural Resources Defense Council, the proposal starts with offering rebates to encourage car owners to trade in their gas-powered vehicles for domestically manufactured electric cars.

“It is geared towards all car buyers, whether you can afford a new car, but there’s even provisions for getting a used electric vehicle and additional incentives if you’re low or moderate income,” Tonachel states.

Tonachel says the plan has the support not only of environmental groups but labor unions and major automakers.

Right now, manufacturers depend on overseas factories for batteries and other electric vehicle components.

“This bill would provide money to establish factories here in America, which is about ensuring that we have high quality, good paying jobs for the auto industry going forward,” he points out.

The plan also would give federal help to build the millions of charging stations that will be needed to make electric vehicles a practical alternative.

The Trump administration has been hostile toward efforts to reduce auto emissions and Tonachel says Schumer’s proposal may have to wait for a new administration.

But he says there are other measures that both Democrats and Republicans support now.

“One of the things that Congress can do right now is extend the existing tax credits, which will also be a good driver for helping to accelerate the transition to electric vehicles.”

A bill called the Driving America Forward Act, which would make 400,000 additional electric vehicles eligible for tax credits, has bipartisan support in the Senate.