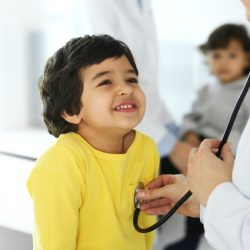 HARRISBURG, Pa. – The number of children in the nation with no health insurance increased from 2016 to 2018, but a new report shows that in Pennsylvania the insurance rate stayed about the same.

The report, from the Georgetown University Center for Children and Families, found that nearly 4.5% of children in the Keystone State lacked health insurance last year, while nationally the uninsured rate rose to more than 5%.

Kari King, president and chief executive of Pennsylvania Partnerships for Children, said that while the report showed the state is doing better than the national average, it also indicates where improvements can be made.

“Our uninsured rate for children under age 6 is actually higher than school-age children,” she said, “and typically across the country you see the opposite.”

King said attacks on the Affordable Care Act and delays in funding the Children’s Health Insurance Program on the federal level have made expanding coverage more difficult.

Joan Alker, executive director of the Georgetown Center, said a combination of actions and inaction by the Trump administration have made health insurance harder to get and have kept families from enrolling their children.

“That’s really a failure of leadership,” she said. “It has not been a priority of this administration to cover children; in fact, they did not even acknowledge until very recently that the uninsured rate was going in the wrong direction.”

She said she believes reducing red tape and increasing outreach to inform families of available options would help reverse the trend.

King said the anti-immigrant rhetoric coming out of Washington also is having an impact. She said 40% of uninsured children in Pennsylvania live in just five counties.

“We think at least in part it’s due to the higher percentage of Hispanic families that are living there,” she said. “That goes back to the chilling effect and their hesitancy to seek assistance and supports when needed.”