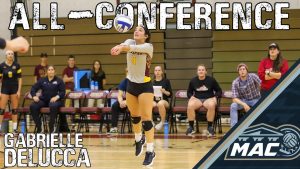 DeLucca led Alvernia with 307 total digs, and was second in the MAC Commonwealth for 4.45 digs per set. She finished the season with 25 aces and 33 assists.

Below is the 2019 All-MAC Commonwealth Women’s Volleyball Team.