Why You Should Go To The Upcoming Brockhampton Concert 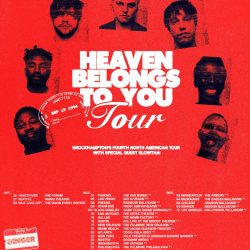 Brockhampton is a rap group that started in twenty fifteen and has made waves in the hip-hop community with the trilogy of albums they released throughout 2017 called Saturation, Saturation 2, and Saturation 3. These three albums were incredible due to the sheer diversity of everything involved. Being a group with 12 different members, they have many different experiences from which they can draw on for their songs.

Varying in race, sexual orientation, and religion, one does not know what the group will touch on next. It is because of this that the Saturation trilogy was so exceptional. From the experimental beats using police car sirens to thought-provoking lyrics about what it is like to be a gay man in the black community, the group has appealed to many niches in the music community as a whole.

People often compare Brockhampton with Odd Future. However, when one takes a step back and looks, the only similarity between them is the fact that they are both hip-hop groups. Odd Future was a group of people that just came together and made songs to break away from typical hip-hop and make something new. Brockhampton strives to change the idea of a boyband to what they are, which is hip-hop.

They envision an all-inclusive community for all different listeners. This can be seen where Matt Champion raps against sexism on the song Junky “Respect my mother, ‘spect my sister, ‘spect these women, boy” implying that women are not just a random somebody, they are someone’s daughter or sister. Kevin Abstract, who is essentially the leader of the group, talks about the struggles of being gay in the line “Why don’t you take that mask off?” implying that he hopes people can come out of the closet. By doing this, it makes things more relatable for women and the LGBTQ+ community, both of whom are often outcasted by the big names of the hip-hop and rap communities. They seek to make hip-hop a place for everyone, no matter their background or even genre of music.

Since then, they have released the album Iridescence in late twenty eighteen, which was recorded in only ten days at London’s renowned Abbey Road Studios. They also had a tour called “I’ll Be There” which went across North America and played at a Tyler the Creator concert. Since then, they have been on a hiatus except for Kevin Abstract, who made a solo album called Arizona Baby. However, Brockhampton just released their latest album Ginger on August 23rd and announced their new tour. On August 26th, Brockhampton started their tour across the entirety of North America. The tour itself is called “Heaven Belongs To You Tour.” It lasts from until December. The most notable date for people in Berks county would be November 27th, when Brockhampton comes to Philadelphia. If interested, check out their music and maybe go see them at the Fillmore.