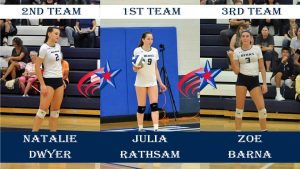 Rathsam has been solid running the Nittany Lions offense and has been one of the teams top defenders. The freshman setter ranks second in the NEAC with 948 assists, while her 8.70 assists per set rank third in the conference and 101st in all of Division III. Rathsam has recorded 49 service aces (sixth most in the NEAC) and averages 0.45 aces per set (12th best in the NEAC). Rathsam leads the Nittany Lions with 402 digs and 3.69 digs per set, which ranks among the top-10 in the conference. In addition, she has racked up 57 kills, 27 block assists, and one solo block this season.

Dwyer has been one of the most effective and consistent hitters for the Nittany Lions this past season. The sophomore outside hitter has compiled 250 kills and sports a .149 hitting percentage on 855 attacks. Dwyer has recorded 10 or more kills on 12 occasions, including a career-high 21 kills in a win over Gwynedd Mercy. She has recorded 321 digs, 44 aces, and 12 block assists. Dwyer has tallied double digit digs 16 times. Dwyer ranks among the top-10 in the conference for service aces, while ranking 11th in points (300.0) and 12th in kills and points per set (3.0).

Barna has been the top attacker for the Nittany Lions offense this season. The freshman outside hitter has registered 251 kills and .142 hitting percentage on 825 attacks. She has recorded 10 or more kills in 13 contests, including a season-best 23 kills against Wilkes University. Barna ranks 11th in the NEAC in kills, points and points per set (3.0), while ranking 12th in points (294.5) and kills per set (2.59). Barna has also racked up 186 digs, 24 service aces, 21 assists, 27 block assists, and six solo blocks this season.

The Nittany Lions defeated Lancaster Bible College on Tuesday night’s quarterfinal round and will advance to the NEAC Semifinal round where they will meet No. 1 seed and tournament host Morrisville State on Saturday, November 9 at 12 p.m. The winner of that game will face the winner of Penn State Abington and Penn State Harrisburg in the NEAC Championship on Sunday, November 10 at 1 p.m.