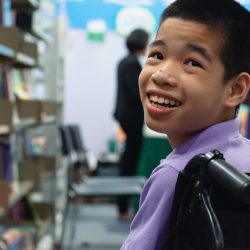 HARRISBURG, Pa. – The proportion of state funding for special education has been falling for more than ten years, but a new report suggests a simple fix could begin to restore equity to the system.

In 2008, the state paid one-third of the cost of special ed, but that has since fallen to only 22%, leaving school districts to pay a much higher share. According to Reynelle Brown Staley, policy director at the Education Law Center, a big improvement would be to update the special-education funding formula, adopted in 2014, so that it uses the same metrics for determining each school district’s wealth as is used in the basic education funding formula adopted in 2016.

The state Legislature has reconvened a Special Education Funding Commission, which held public hearings on the issue in October and will issue a report by the end of November. Staley noted when the basic education funding commission was convened three years ago, it determined the method used to measure district wealth in the special education funding formula was flawed.

“We hope that the Special Education Funding Commission will act on that recognition and adopt new factors that are currently working through the Basic Education Funding formula to direct money to the districts that need it most,” she said.

She added restoring the state’s share of special-education funding to 2008 levels would require $465 million in additional state funding, but the commission’s charge does not include addressing overall funding levels.

The current formula doesn’t assess if districts are receiving adequate funding to meet their students’ special-education needs. But Staley said the commission’s work could finally help restore equity to the system.

“There’s an opportunity to ensure that the districts that have the greatest need and have the least capacity to meet student needs are getting the support they need through a change in the special-education funding formula,” she said.

Currently, 86% of state special-education funding still is distributed to districts based on the amount they received in 2014.