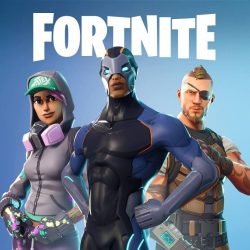 Fortnite is a one-of-a-kind online video game played by millions of people around the world. It was developed by Epic Games and it was initially released on July 21st, 2017. It gained a large attraction because it was free to play. Fortnite is a battle game that is much like how the movie “The Hunger Games” is set up. You start with nothing and have to find guns, ammunition, and supplies. The game is unique because of its cartoon features, infamous dance moves, and you can build walls and ramps to protect yourself in the game. Being able to build is part of the reason this game blew up. Fortnite is also known for its vibrant and appealing visuals. There is little to no competition for this specific game because not much else compares to it.

Fortnite had 10 seasons and recently came out with Fortnite 2. Season one and two of Fornite were very uneventful. When season 3 rolled around a meteor appeared on the Fortnite map. The meteor started small and grew bigger every day. About a week before season four, small meteors would fall from the sky. These meteors could break the structures that the gamers had built and buildings that were already in the game. It became obvious that the growing meteor was going to fall onto the Fornite map. When season four finally began, the meteor had hit the map turning a location, that had been warehouses, into a gaping crater. Each season has a different story or event that takes place that changes the map.

Flash forward to season 10. Towards the end of season 10, Fortnite released a picture on October 12th,2019, with the caption, “The end is near. 24hrs…” The next day the released a second picture with the caption, “This is the end.” Gamers would then log onto their Fortnite accounts to find a black hole sucking their avatar and the Fortnite map up. For a full 48 hours, a black hole was all you could see when you tried to log onto Fortnite.

There were no updates from Fortnite’s twitter during that time. There was one hint from a famous Fortnite player named Ninja. He posted a video saying “Tacos” on October 13th, 2019. That was the day of the black hole. People put together that he was referring to taco Tuesday. Sure enough, Tuesday, October 15th, 2019, the game was back online. However, it is now Fortnite 2, with an all-new map and new features.