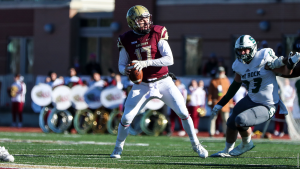 LOCK HAVEN, Pa. — Kutztown University quarterback Collin DiGalbo was selected as the PSAC East Offensive Athlete of the Week for the fourth time this season, as the league office announced its weekly award winners Monday morning.

DiGalbo threw for 227 yards and two touchdowns on 21-of-32 passing, while gaining 92 yards on the ground and scoring once more in the Golden Bears’ 37-35 loss to Slippery Rock in the PSAC Championship game, Saturday.

The fifth-year senior’s 26 touchdown passes this season are a new career-high and seventh most in a season in program history. DiGalbo has thrown for multiple touchdowns in nine of the 10 games he’s played in, while also protecting the ball with no interceptions in six of his last seven outings.

The Secane native is just five passing yards shy of setting a new career-high, now sitting at 2,465 for the season after Saturday’s performance. DiGalbo ranks sixth in NCAA Division II in total points responsible for (218) and per game (21.8), seventh in completion percentage (66.8%) and eighth in passing efficiency (172.3).

DiGalbo’s rushing TD on Saturday was the 33rd of his career, two shy of tying Craig Reynolds’  KU all-time record of 35.

Kutztown will host Tiffin in a NCAA Division II Football Championship First Round game at Andre Reed Stadium this Saturday, Nov. 23, at 12:05 p.m.