by Will DeMarco, Alvernia University 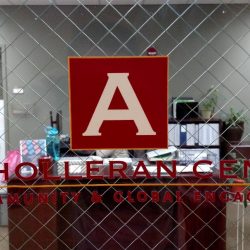 The Hollerans’ generosity stems from a promise made more than six decades ago. T. Jerome Holleran wanted to study electrical engineering at Carnegie Tech. Mr. Holleran, however, could not afford the tuition. Through a friend of a friend of the family, he was invited to meet with William Gruse, who was in charge of research at Gulf Oil in 1953. As reported in Carnegie Mellon Today, during the interview, Mr. Gruse suggested a proposal. “I’ll pay for your going to Carnegie Tech,” he says, “if you meet three conditions.” Holleran asked what they were before agreeing to them.

First and foremost, he would have to get good grades. The second condition was to mow Mr. Gruse’s lawn in order to earn money to pay for his books. When Mr. Holleran heard the third condition, he thought to himself that it was a bit odd, but he immediately agreed to it. The third condition was, “Someday, return the favor.”

The Hollerans have donated millions of dollars towards scholarships, served many community organizations, including Safe Berks and the Berks County chapter of the United Way, and were the recipients of the 1999 Thun Award, named after local industrialist Ferdinand Thun. The award recognizes those with significant contributions of civic service and an enduring sense of commitment to the community. Mr. Holleran has certainly held up his end of the bargain by returning the favor.

Jodi Radosh, Associate Director of the Holleran Center, said that about 200 students participate in an average day of service, not including the alumni that come back to take part as well. She also added that many students exceed the required 40 hours of service. Some students do up to 500 hours and are recognized at graduation. “We are trying to do the best we can to make Berks County a better place”, she concluded. Professor Sue Guay, an instructor of Communication, includes service learning in the courses she teaches. When asked if it was a requirement or if it was a choice, she said that it was a choice. “It’s an extension of the class and builds community amongst the class and allows them to use their skills that they learned in class out in the community.”

What do students think of the 40-hour service commitment that is required for graduation? Alvernia freshman Leslie Vargas responded, “It’s good because it can get people out there in the school or the community and provide opportunities for people.” Fellow freshman D’Angelo Ferguson said, “I think it’s a good idea. It gives an opportunity to work together and to give back to the community.” Non-traditional students felt a little bit differently. “Service is a great way to connect with their community. However, older students and veterans like myself who served this country might not find it as helpful or impactful as younger students,” said Alvernia senior David Rupert. Graduate student Stephanie Brown added, “It’s beneficial for the core values of the university, but it could be very difficult for students with busy schedules. They should make it optional but offer incentives to encourage students to take part.”

Since we here at Alvernia University are strongly influenced by our Franciscan identity, it only makes sense that The Holleran Center echo this sentiment through its goals as a teaching and learning organization. As part of its commitment to the local community, the Holleran Center has established the South Reading Youth Initiative, where Alvernia students operate after-school programs at the Millmont and Tyson-Schoener elementary schools. Alvernia students also help guide Reading High School students as part of the Reading Collegiate Scholars Program. They assist the high school students that are interested in college by helping with their college applications and choosing a major. The Holleran Center, by making community relationships an intrinsic part of the curriculum, helps to instill in its students an enduring devotion to service as engaged citizens. It remains their hope to form ethical leaders with moral courage to do well and do good.