Avril Lavigne is Back 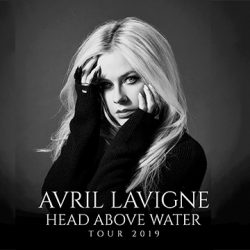 “Someone older, wiser, but still down to rock,” according to MTV, Avril Lavigne makes her way back after releasing five albums in a twelve-year period. After battling Lyme disease, all the different and unique sides of her came out in her newest album “Head Above Water” and on tour this past month and a half.

This tour was her first tour in just over five years singing the vulnerable and emotional newer songs like the title track “Head Above Water” which talks about her having faith to get better and become stronger than ever. She also sang a few oldies like “My Happy Ending”, “Heres to Never Growing Up”, and fan favorite “Complicated.” Avril talked about how her first number one hit seventeen years ago meant so much to her, saying, “This song is so special to me…I wrote it when I was seventeen.” She sang it on her most recent tour as a dedication to her long-time fans.

Avril Lavigne is the type of artist who doesn’t “scoff at her older, less mature material,” rather she encourages it. “Sk8ter Boi” concluded the set with a lot of energy and a “blast of confetti,” but came back out for a two-song encore singing the dramatic “I Fell in Love With the Devil” and the 2002 ballad “I’m With You.” Although she may have been changing on the outside over the past seventeen years, she will never change on the inside, as she hasn’t left her old self behind and continues to live on as an icon.

Avril Lavigne’s tour and performance was a symbol of growth and determination. She has become so much stronger and confident in sharing her feelings and what she has gone through. During her struggle, she has been supported by so many fans, people who love her, and her music. As she was performing her songs during the concert, clips of her music video would play in the background giving it the whole vibe from when the songs were released. During her performances, she stayed behind the piano, played guitar and the drums, or stood while singing, giving a chilling production.

In an interview with Riff Magizine, Avril explains how she thought she was “going to be really nervous, but I wasn’t.” She explains how she was really calm and present and felt grounded. She also tells how she felt the familiarity being back on stage and how much she missed it. Her tour in America is over, but she will continue worldwide, so if you did not make it to any of the shows, be sure to check out some videos.