by GoggleWorks Center for the Arts 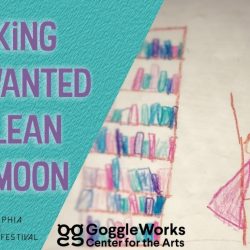 READING, PA – GoggleWorks Center for the Arts (GoggleWorks) is bringing a different kind of art to its stages. The Philadelphia Women’s Theatre Festival (PWTF) and Goggleworks present an interactive reading of The King Who Wanted to Clean the Moon on  Sunday, December 8th. The King Who Wanted to Clean the Moon is best suited for children ages 5-10 (but all ages are welcome). Beginning at 4pm, kids will participate in crafts and activities that touch on the show’s themes, followed by the 30-minute performance. If you are looking for a change of pace and a slightly more adult themed twist, A Very Berks Holiday Comedy Improv will bring the laughs and more than a few surprises to the Sly Fox Stage during GoggleWorks’ annual Arts Festival Reading, which is expanding as a Holiday Market, on Saturday, December 14th. A locally-based troupe of professionals and performers will feed off the audience and spin story lines designed to make you double over.

About The King Who Wanted to Clean the Moon

The King Who Wanted to Clean the Moon is a family-friendly, interactive play using music to explore climate change, gender roles and curiosity. In this story, the King loves to read each night by moonlight; she reads stacks and stacks of books. One evening, she discovers that she can’t read because the moon is dirty. The King creates several different plans to clean the moon only to realize she can’t reach it. In the end, she boards a rocket ship never to return to earth to accomplish her task of finally cleaning the moon.

“We are thrilled to present such a family-centric presentation, which expands the boundaries of our visual arts programming,” said Levi Landis, executive director of GoggleWorks. “The partnership with the Philadelphia Women’s Theatre Festival is perfect as it teases a city-wide celebration of women in the arts in 2020, to coincide with the anniversary of women’s suffrage.”

The King Who Wanted to Clean the Moon Written by Ashley Kern
Music by Damien Figueras
December 8, 2019 at 4pm

Tickets are free of charge, but reservations are highly recommended. Reserve at https://www.artful.ly/store/events/19239

About A Very Berks Holiday

Audiences will enjoy an hour of raucous, off-the-cuff writing from prominent leaders in the national improv comedy scene. A Very Berks Holiday, or, Outen the Lights Santa is Coming, the full name for the production, is a Second City style sketch revue with an improvised second act.

“I didn’t know someone could get a PhD in improv, but Matt Fotis essentially has one.” said Landis. “His wife, Jeanette Fotis, who joins us from the theatre department at Penn State Berks, is his equal as a power house performer.”

Admission is free with a ticket to Arts Festival Reading- $8 in advance and $10 at the door.

PWTF fosters and encourages women in the performing arts by offering unique opportunities for exposure, professional, artistic and personal development and a platform for performance. We hope that by building a community of a diverse group of artists through the culmination of a citywide celebration, Philadelphia will become a national leader in recognizing the valuable influence women play in the arts, at the forefront of honoring the value of women’s contributions to storytelling, artistic advancement and creative innovation. Visit phillywomenstheatrefest.org for more information.

About Matt Fotis, producer of A Very Berks Holiday

Matt Fotis is an Associate Professor of Theatre at Albright College where he teaches improvisation, acting, and writing for performance. His work has appeared in Theatre Journal, Theatre Topics, The Journal of American Drama & Theatre, Theatre/Practice, The Encyclopedia of Humor Studies, The Encyclopedia of American Studies, and MLB.com. He is also an award-winning playwright, whose work has been produced or developed at such places as The Lark, The Playwrights’ Center, The Kennedy Center, The Great Plains Theatre Conference, Emerging Artists Theatre, MATC Dramatists Play Lab and many others. His plays have won The Mark Twain Prize for Comic Playwriting, UCM’s Theatre for Young Audiences National Playwriting Competition, and the Sonoma County Repertory Theatre’s New Play Competition. In addition to his work with the Domino Players, he runs Albright Improv and The Children’s Theatre of Albright.