A New Homcoming for Old Glory 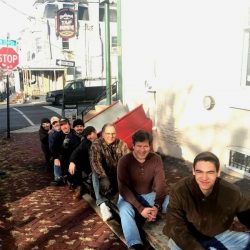 In the winter of 2016, BHC Trustee Rick Polityka uncovered a history mystery. After a series of serendipitous events,  Rick unearthed the history behind an early 1900s sled, or  tiller known as Old Glory, that was hidden away in the basement of the Northeast Taproom in Reading, PA. The tiller, which is believed to be over 100 years old, has made its way to a new home: the Berks History Center.

At 19 feet long and over 300 pounds, it is hard to believe that this artifact had gone unnoticed for so long. On November 30, 2019, a crew of 11 volunteers met at the Northeast Taproom to retrieve Old Glory from its hiding place. After a short time and a lot of muscle power, the behemoth tiller saw the light of day for the first time since the dawn of the 20th century. Thanks to Orth’s Towing, Old Glory was transported to its new home at the Berks History Center.

While the efforts to move Old Glory were great, the stories behind this artifact were well worth the work. In his research, Rick discovered that Old Glory was one of many tillers that coasted the streets of Reading in late 1800s and early 1900s. “Coasting” down popular sledding slopes, such as Chestnut, Buttonwood, Elm, Greenwich, Spring and Robeson streets, was a favorite winter pastime in the City of Reading.

As for Old Glory,  up to 20 children could fit on the sled, which could travel up to 65-70 mph, with no way of stopping it. Tillers provided an entertaining yet dangerous thrill for children and adults alike and the phenomena was commonplace until several serious accidents caused authorities to start cracking down on the activity. By 1925 tillers were rarely seen on city streets. Old Glory was involved in an accident with an 8 man tiller at the intersection of 11th & Chestnuts Sts. on February 16, 1916. It has sat in the basement of the Northeast Taproom at 12th & Robeson since – until last week when it was moved to the Berks History Center.

A Note from the Berks History Center:

A lot of research went into discovering the story behind this and other tillers in the winter of 2016-2017 by the tiller team of Charlie Adams, Corrie Crupi, Sharon Merolli, Jon Showers Jr., Dave Kline, Richard Polityka and Michelle Napoletano Lynch. A huge thanks to all these fantastic #BerksHistoryBuffs for making this story come alive. Also a big thanks to all the folks who volunteered to move Old Glory to its new home at the Berks History Center, including Orth’s Towing!
For more photos and more Berks History, CLICK HERE!