WACO, Texas — After matching a program single-season record with 11 wins and taking Kutztown University to the second round of the NCAA playoffs, head coach Jim Clements was announced as the American Football Coaches Association (AFCA) Region 1 Coach of the Year. 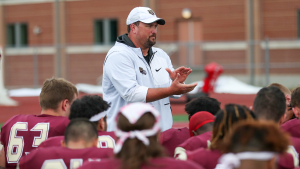 Clements has presided over the back half of the most successful decade in Golden Bear football history and elevated Kutztown into the upper echelon of the Pennsylvania State Athletic Conference. He’s compiled a 48-20 record in six seasons at KU, which includes a pair of PSAC East titles and consecutive trips to the NCAA Division II Championship tournament in 2018 and 2019.

Kutztown achieved its first ever 10-0 start in 2019 and climbed as high as No. 13 in the AFCA Division II Poll and No. 15 in the D2Football.com Poll. Clements’ team led the PSAC and ranked fourth nationally with 32 turnovers gained, while also leading the conference with 13 fumble recoveries, team passing efficiency defense (104.75) and kickoff returns (24.59 yards per return). KU’s offense hummed along all season, averaging 35.5 points and 449.0 yards per game –both fourth best in the PSAC. The defense did its job, too, allowing just 18.8 points per game, the fewest given up by a Golden Bear team since 2001 (16.3).

Clements owns the highest win percentage of any head coach in program history (.706) and has a 34-9 record in PSAC games (.791). He’s already ascended to second among Kuztown’s all-time winningest coaches and is just 13 wins shy of George Baldwin’s program record 61. The Golden Bears have enjoyed increased win totals in each of the last three seasons and Clements has never had a losing season in 14 campaigns between Delaware Valley and KU.