Seniors Mackenzie Fuhrman and Kyra Wozniak, along with junior Leigh Roselli were voted to the prestigious teams. Fuhrman was named First Team while both Wozniak and Roselli were selected to the Second Team. 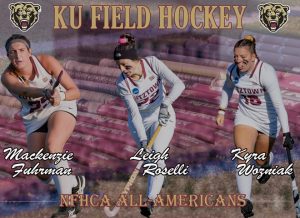 The three Golden Bears honored are the most for the program since 2017 when head coach Marci Scheuing also had three on the list. That pushes the program’s numbers to 44 total All-Americans, with KU earning at least one player on the team for the seventh consecutive season. The trio were also honored as All-Pennsylvania State Athletic Conference (PSAC) performers this year.

Fuhrman, now a three-time, First-Team All-American, finished the 2019 season with six goals and a team-best eight assists, tied for fifth in the conference in assists. She dished out 28 career assists, tied for third in program history. Fuhrman was an integral part of Scheuing’s lineup on both sides of the field over the last four seasons. She started in 75 career games out of a total of 77 in her four years.

Wozniak had another strong campaign up top for the Kutztown offense. She tied a team-high with 10 goals, tied for seventh-most in the conference, and had 23 points, which ranks ninth. Wozniak, a three-time All-American herself, eclipsed the 100-point plateau earlier this season and currently boasts 102 points, good for seventh in program history. Her three assists this season tied a career-high.

Roselli enjoyed a breakout junior season. She recorded a career-high four goals and tied a career-best with six assists for a career-high 14 points during 2019. The defender had two defensive saves, tied for ninth in the PSAC. Roselli has started every game (41) over the last two years and has been the main piece to start every penalty corner.

The Golden Bears (15-6 overall) qualified for their first Division II national semifinal since 1982. They played in the NCAA championship game in 1997 and has never won a national championship. The Maroon and Gold won just their second NCAA postseason game in program history, first since 1988. They also won 15 games this season, the most by a KU team in a single-season since 2007.