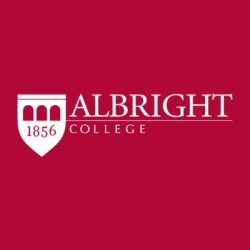 Albright College’s Domino Players theatre troupe has been invited to perform “The Curious Incident of the Dog in the Night-time” on the main stage of the Kennedy Center American College Theatre (KCACTF) Region II Festival, in the University of Maryland’s Kay Theatre, Jan. 17, 2020.

Based on a best-selling 2003 novel by Mark Haddon and adapted by Simon Stephens, “Curious Incident” is a Tony and Oliver Award-winning play about a 15-year-old math whiz who lives with his divorced dad in a working-class town near London. After being falsely accused of killing a neighbor’s dog, the brilliant boy — who has difficulty dealing with the sounds and stresses of everyday life — decides to investigate the crime. The secrets he unearths prompt him to leave his trusted teacher and the familiar streets of his hometown for a life-changing train trip to London.

Albright cast and crew members took on the play in November, directed by Jeffrey Lentz, M.M. ’85, senior artist in residence and chair of music. To help audience members “see” inside the head of the main character (played by theatre major Bence Veres ’21) Albright’s design crew created a colorful, mathematical space, and filled Wachovia Theatre with purposeful music, meant to help the audience feel the character’s heart.

Last year, Albright’s theatre troupe received an astounding nine national awards for its production of “A Raisin in the Sun,” including the Kennedy Center’s highest national honor for Outstanding Production of a Play — the troupe’s third national title since 2007.

“This is the 11th time that Albright College had been invited to bring a production to this prestigious regional theatre festival,” said Lentz. “Albright is a three time recipient of  KCACTF’s highest honor — the National Award for Best Production of a Play (in 2007, 2016 and 2019) — along with dozens of other national accolades for design, directing, acting, etc., throughout our history with this organization.”