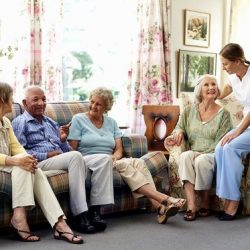 Baby boomers have changed the face of the U.S. population for more than 70 years and continue to do so as more enter their senior years, a demographic shift often referred to as a “gray tsunami.”

The 2020 Census will provide the most up-to-date count of the baby boom generation, now estimated at about 73 million.

“Data from the 2020 Census will show the impact of the baby boomers on America’s population age structure.”

— Wan He, head of Aging Research Programs for the Population Division of the U.S. Census Bureau

“Data from the 2020 Census will show the impact of the baby boomers on America’s population age structure,” said Wan He, head of Aging Research Programs for the Population Division of the U.S. Census Bureau.

Why Knowing Where Boomers Are Matters

Knowing about the number of people age 65 and older is important for tribal, local, state and federal lawmakers. They will use 2020 Census statistics to help decide how to spend billions of dollars annually in federal funds on critical public services for the next 10 years.

Everyone uses roads, hospitals and emergency services but some state and federal programs target specifically older populations — such as money for senior citizen centers, job-training programs, and Medicare Part B health insurance.

“The census is really important to us in the aging community,” said John Haaga, of the National Institute on Aging in Washington, D.C. “It’s our only way to figure out how things are different across the country, what areas are aging faster, where elderly disabled people live, or where older people are concentrated, like Appalachia or West Virginia, because young people are leaving for the cities.” Older people are remaining behind there.

Other states, such as Florida, have large older populations because people are moving there to retire, according to Haaga.

By using Census Bureau statistics and its geographic information system, analysts and community planners can get a refined picture of where older Americans live and how close they are to the services they need. That helps lawmakers or business people decide where to open health clinics or senior citizen centers, among other services.

“You can start to look at specifics like how many older people are living alone who are more than 10 miles from an adult day care center.”Haaga said. “You can answer questions of access and how to improve it.”

At an estimated 73 million, this generation is the second-largest age group after their children, the millennials, born from 1982 to 2000.

“As boomers age through their 60s, 70s, 80s and increasingly beyond, the ‘big bulge’ of the boomer generation will contribute to the overall aging of the U.S. population in coming decades,” said Stella Ogunwole, a demographic statistician with the Census Bureau.

“The older population is becoming even more significant,” she said.

But aging boomers are not the only reason the nation’s population is getting older overall. Longer lives — in part due to better health care — and record low birth rates among young women are also major factors, according to Haaga.

The total fertility rate of U.S. women is now 1.7 children per woman, below the 2.1 children needed to replace the population.

Older adults are projected to outnumber children under age 18 for the first time in U.S. history by 2034, according to Census Bureau projections.

“The mismatch between old and young will have implications across the coming years,” said Dr. Grace Whiting, president and CEO of the National Alliance of Caregivers.

“We aren’t having enough children to take care of us in our old age,” she said. “Look at my family: my in-law was one of six children, my husband and I were one of two, and we don’t have kids. Extrapolate that out, and that’s what’s happening nationwide.”

Whiting’s concern points to the increasing need for caregiver and health services for people over age 65, many of whom use services whose funding depends on decisions made based on census data.

Lawmakers and planners use census statistics to help decide how to spend on programs that help improve the quality of life for all people age 65 and older.

Medicaid, the health insurance program for low-income people including those age 65 and older, is the largest federal program that uses census statistics to determine funding. In 2015, Medicaid received $312 billion, according to a 2017 report from the Census Bureau.

Third is Medicare Part B, at $70.3 billion, which is part of the Medicare health insurance program for all people over 65 years old, no matter their income.

These programs are just a few of the reasons why it is important for people age 65 and older to respond to the 2020 Census.

They can respond online, by phone or by mail.

The funding levels for these services are determined, in part, from statistics produced by the Census Bureau. The federal funding program for social services grants gives states money to spend on a wide variety of programs.

In 2015, the program granted $1.6 billion, according to the Census Bureau, and 10% of the grants were aimed at the needs of vulnerable and elderly adults, according to the Social Services Block Grant 2016 focus report. (The SSBG is part of the U.S. Department of Health and Human Services.)

One of the largest programs under SSBG that is aimed at the elderly is for people suffering from abuse or neglect, including maltreatment, lack of adequate food or shelter, or financial abuse. Sadly, one in 10 older adults experience some form of abuse, according to the Census Bureau.

Getting healthy food is a key concern for low-income older people.

The SFMNP is administered by state agencies such as Departments of Agriculture or Aging, and federally recognized tribal governments. Not all states operate the SFMNP statewide. In 2016, an estimated 816,000 seniors used the program.

The Senior Community Service Employment Program (SCSEP) is a work-based job-training program for older individuals. Two-thirds of participants are women and almost half are from a racial or ethnic minority, according to the SCSEP. Veterans and qualified spouses are given priority for enrollment.