New Year’s Eve “Toast with a Ghost” at Brinton Lodge 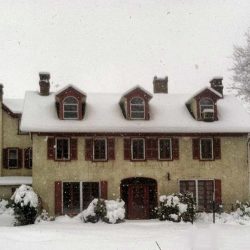 DOUGLASSVILLE – The legendary haunted landmark of Berks County will open its doors on December 31, 2019, for a holiday celebration of otherworldly proportions. The 5th annual New Year’s Eve “Toast with a Ghost” will include a candlelight tour, ghost stories, and a toast to ring in the New Year.

On the tour of the 300-year-old mansion, guests will hear the legends that sprung from its days as an exclusive gentleman’s club in the 1920s, the true story of a free love cult that shocked the surrounding community in the 1800s, and the legacy of ghostly encounters that haunt Brinton Lodge to this day. The tour includes parts of the building that are usually closed to the public.

The event concludes with a spirited toast to the New Year, which is included in the ticket price. Guests may choose beer from Hidden River Brewing Company, wine, or sparkling cider for the toast.

Tickets and Tour Times
Tours are available hourly from 6:00 p.m. to midnight, and last approximately an hour. Tickets are $24 per person and include one drink for the toast. There will also be a cash bar and light snacks. Tickets can be purchased online at www.brintonlodge.com or in person at Hidden River Brewing Co.

About Brinton Lodge and Hidden River Brewing Company
Brinton Lodge’s storied history began in the 1700s when it was a small farmhouse built on land deeded by William Penn. In the early 1900s, it was transformed into an opulent summer house, which gave its interior the unexpected grandeur and beauty still seen today. In the 1920s, it was used as an exclusive Jazz Age gentleman’s club, and, until 2009, it housed a number of well-known restaurants. Today, it is being preserved as a unique local landmark, hosting events throughout the year to raise funds for restoration. It is also home to Hidden River Brewing Company, a craft brewery and brew pub. It is located at 1808 W. Schuylkill Rd. Douglassville, PA 19518.