Reading United A.C. are pleased to announce dates for tryouts for the club’s 2020 USL League Two, United Reserves and U19 rosters 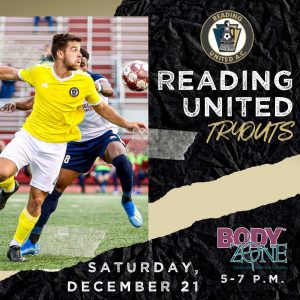 The December tryout will be held at Body Zone Sports and Wellness Complex from 5:00pm-7:00pm. The remaining tryouts location and times are to be announced.

Online registration (link below) and in person is $80 per player. All players will need to arrive to each date fifteen to twenty minutes early for check in and warms ups.

Known as one of the preeminent clubs that help young prospects reach the professional ranks, Reading United has produced over fifty professional soccer players who currently play in Major League Soccer, the United Soccer League and with professional clubs in Europe and South America. In total, almost 100 players have signed professionally since 2010 after playing in Reading.

Former Reading forward JJ Williams, defender Kamal Miller, goalkeeper Ben Lundt, and forward Mark Forrest were all selected at the 2019 MLS SuperDraft. 2019 was the tenth consecutive year that at least one former Reading United player was selected in draft.

Eleven players in total from our 2018 squad signed professional contracts, including two players (Kamal Miller, Ezana Kahsay) who capped for their countries in international play.

Reading United enter their 17th season of play in USL League Two looking to build on the success of the 2019 league season that saw the club win the Eastern Conference Championship for the second straight season and advance to the USL League Two Championship for the second time in club history. Our trip to the playoffs was the eleventh time in twelve seasons that we’ve reached the postseason. The club saw two players named to the All-League team – Felipe Hideki (Mid-America Nazarene; NAIA) and Lamine Conte (Louisville; DI), as well as head coach Alan McCann gaining Coach of the Year honors for the second straight season.