One of the most important days in the history of Reading 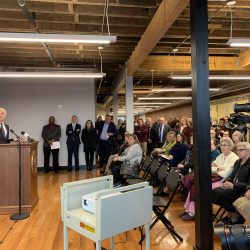 John Loyack, president of Alvernia University, unveils plans to expand Alvernia’s business programs and student housing to a site on Penn Street as part of its “Reading CollegeTowne” initiative.

READING, PA (December 17, 2019) – In the 18 years that the Community Foundation has been working to ignite a spark to revitalize the center city of Reading, I’ve probably said a thousand times: “Penn Street doesn’t have any problems that a few hundred college students wouldn’t solve.” Still, Reading’s historic business district has had trouble catching a break.

The announcement this week that Alvernia University is moving toward a purchase and sale agreement of the building at 401 Penn Street is the catalyst that Reading needed. There is still a lot of work to be done (and revitalization is a process, not an event), but history will record December 16, 2019, as one of the most important days in the history of the city.

As part of its “Reading CollegeTowne” initiative, Alvernia is expanding its business programs to the building and taking steps to create a new engineering program at the site. In addition, the building will include units for student housing. This is the infusion of energy that will greatly speed up the revitalization process in the core of the city.

College students are ideal residents for downtowns. They want to walk to amenities like restaurants, bars and retail shops. By developing academic offerings downtown, Alvernia will also be attracting faculty and staff to work, further building the economic base. Adding to the excitement is the addition of an engineering program, which would provide an important new educational offering in our region.

I’ll admit that it’s been frustrating watching major community organizations (some of which tout themselves as “anchor institutions”) ignoring the center of the community. That makes the news from Alvernia all the more welcome.

Sure, this is a good deal for Alvernia. The university’s president, John Loyack, will be the first to tell you that using existing space accelerates his timeline and lowers the up-front costs that Alvernia will incur to expand its programs. That’s good for Alvernia. And since Alvernia’s an important institution for our region, it’s good for Berks County.

But we believe that it’s possible to do good and do well at the same time. Alvernia believes (and has for a long time) that it has a moral obligation to use its assets to strengthen opportunity in the city. As part of that commitment, Alvernia will be starting a student-centered business incubator (the Community Foundation – which runs its own Jump Start Incubator – is working with them on details).

It’s a big week in the history of Reading. Alvernia’s announcement means that we’ll be turning a significant corner in the life of the city. We owe Alvernia a sincere “thank you” and should do everything we can as a community to help them succeed in this bold venture.