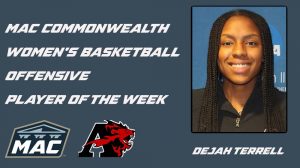 Terrell set a new career-high with 27 points and matched an Albright single-game program record with 26 rebounds in the Lions 81-50 win over Hood last Saturday. The 26 rebounds were the most in a game by any Lions player since Lauren Keffer set the record back in 1978 against Juniata. Her performance helped Albright outscore the Blazers 51-29 in the second half after they trailed by one point at halftime.

It is her second-straight week of earning a player of the week award from the conference, and third overall on the season.