New Time Capsule Will Be Opened 100 Years from Now 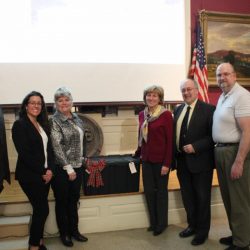 On December 13, 2019 at the Berks History Center’s Incorporation Day Birthday Bash event, which celebrated the 150th anniversary of the organization’s original incorporation date, BHC Trustee and 150th Anniversary Co-Chair, Floyd Turner presented a newly assembled time capsule that will be added to the BHC museum collections and opened 100 years from now.

About 120 people were in attendance at the event, which featured light refreshments and a casual happy hour with longtime friends and supporters of the Berks History Center.

Proclamations were presented acknowledging the Berks History Center’s contributions to Berks County by the Senate of Pennsylvania by Senator Judy Schwank, the PA House of Representatives by Representative Thomas R. Caltagirone, and the City of Reading by City Councilwoman, Donna Reed. Also in attendance were Craig Lutz on behalf of Senator David Argall; Bill Royer on behalf of Pennsylvania State Representative Ryan Mackenzie; and Berks County Commissioner, Kevin Barnhardt.

At 6:30pm Floyd Turner presented the time capsule to Executive Director, Benjamin Neely, who accepted the materials into the BHC’s care. The time capsule will be preserved in the BHC museum collection with instructions for it to be opened on December 13, 2119, on the organization’s 250th birthday.

“After opening the World War I time capsule last year (on November 28, 2018 at the Berks History Center), I thought it would be a good idea to put together a time capsule in recognition of the 150th anniversary of the Berks History Center,” said time capsule organizer, Floyd Turner. “I wanted the project to be a surprise but exactly how to do it and what to put into such a time capsule proved to be more of a challenge than I anticipated. I didn’t want to be the sole arbiter of the contents so I reached out to a number of people to ask for their contributions and let them make up their own mind regarding what they’d like to contribute.”

Contributors to the Time Capsule Include:

Incorporated on December 13, 1869 as the Historical Society of Berks County, the BHC is one of the oldest organizations of its kind in Pennsylvania. For a century and a half the goal of the BHC has remained consistent; to preserve the history and heritage of Berks County and to inform, educate and inspire our community regarding that history.

The Berks History Center thanks the many businesses in our community who helped to make BHC’s 150th Anniversary celebrations possible through sponsorship support: