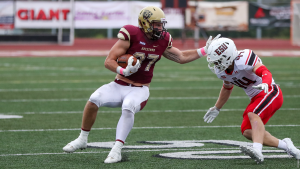 The teams, presented by Regions Bank, were chosen by a panel of sports information directors and the AP.

Pilkerton set new career-highs across the board with 44 catches for 666 yards and 10 touchdowns as the Golden Bears tied a program record with 11 victories (11-2), won the Pennsylvania State Athletic Conference (PSAC) Eastern Division title and advanced to the second round of the NCAA Division II Championship playoffs.

Pilkerton registered four multi-score games and came up big in critical games for the Maroon and Gold. The third-year Golden Bear made a single-game career-high 10 catches for 129 yards and a pair of TDs in Kutztown’s 37-35 loss to Slippery Rock in the PSAC Championship game, Nov. 16, and followed that up with his second straight 100-yard, two-touchdown game, pulling down seven passes for 105 yards in a 33-31 NCAA First Round win over Tiffin, Nov. 23.

Pilkerton is Kutztown’s first AP All-American since Jordan Morgan in 2015 and 12th in program history. He finished with 103 catches for 1,467 yards in 33 career games as a Golden Bear.