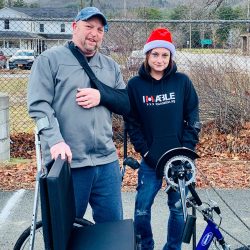 IM ABLE Foundation has existed in Wyomissing, PA since 2007 and has redefined what is possible for thousands of people in Berks County and the surrounding communities. The Foundation removes obstacles that prevent people from being physically active by providing grants for adaptive equipment, resources, fitness opportunities, and motivation.

Devann Murphy overcame childhood cancer and is a former IM ABLE Foundation grant recipient. During her treatment at Boston Children’s Hospital, she promised herself that when she got better, she would run the Boston Marathon. She accomplished that goal in 2018 using the handcycle given to her by the IM ABLE Foundation. Since, she has come in first place in a number of marathons including the 2019 Boston and New York City races. Inspired by the impact the Foundation had on her life, Devann started an IM ABLE Chapter in her hometown of Keeseville, NY.

On Sunday, December 15, 2019, the New York Chapter of the IM ABLE Foundation presented its first adaptive bike to Scott Arbuckle. At 35, Scott’s active lifestyle changed when he had an accident while racing dirt bikes. After multiple surgeries where his spine was fused and stabilized with two steel rods and four screws, Scott was told he would be in a wheelchair for the rest of his life. Fifteen years and seven surgeries later, he can now walk with the help of braces and crutches.

“At first, I lived pretty much day to day in constant pain and was depressed with the way my life changed. I had to dissolve my construction company and went through a divorce. I hardly ever did anything or went anywhere because it bothered me when people would stare at me. I have since remarried and my wife has brought meaning back into my life. Although I still have pain, I also have the will to live. My wife is active and fit. I am looking forward to exercising with her and possibly doing 5K’s with her and eventually work our way up to a marathon. I love being outside. With this handcycle, I can get my exercise in while having the feeling of accomplishing something.”

“He’s sooooo excited and eager to get going,” said Devann. “We plan to ride together this spring. He and his wife have already signed up for the Doc Lopez Run in March. He fell a couple of weeks ago and tore his rotator cuff, which is why he’s in a sling now. His PT team plans to use the handcycle to help with his rehab. Thanks to the IM ABLE community for making this possible!!”

For more information or to support IM ABLE’s mission to provide opportunities for people with adaptive needs, please go to https://imablefoundation.org.