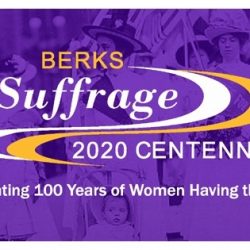 ​​The Berks Women’s History Alliance is a group of organizations who have joined together to create events celebrating the centennial of women gaining the right to vote under the banner of the Berks Suffrage 2020 Centennial.

On Jan. 1, look for Ms. Liberty in the Rose Parade. You can’t miss her; she’s 30 feet tall, wearing a “Votes for Women” sash, and her tablet has the 19th Amendment, the amendment that women fought hard to win in order to vote, like “real” citizens.

Women will be front and center in this parade: the city of South Pasadena also has a suffrage-themed float, and the Tournament of Roses Association itself is led by Laura Farber. She’s a dynamic leader — the third woman and first Latina as its president.

The float’s name is “Years of Hope, Years of Courage,” and the motto is “Upon their shoulders, we won the vote. Upon our shoulders, we protect the vote. We celebrate and build for the future.”

Dolores Huerta will be on the float, joined by descendants of heroes like Ida B. Wells, Susan B. Anthony, Harriett Tubman, Elizabeth Cady Stanton and Frederick Douglass. Like the Statue of Liberty, they will wear the sash of gold, purple and white — the colors of the US Women’s suffrage movement.

In Berks County, PA, a 2020 centennial celebration is being planned with the kickoff in March of 2020  during Women’s History Month at The Berks History Center and a celebration dinner to be held in August of 2020 commemorating the ratification of the 19th Amendment.
​
​​​Women’s and girl’s organizations, educational facilities and historical groups are encouraged to become part of the commemoration in the Greater Reading area of this important historical event by planning their own events and exhibits and share their information as part of the Berks Suffrage 2020 Centennial initiative.