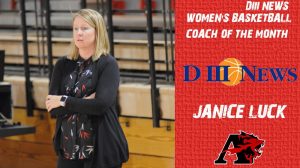 Luck has led the Lions to a 12-0 start to the 2019-20 season, which included five wins in the month of December. It is the longest unbeaten stretch to start a season in Albright women’s basketball history. The Lions have rose to as high as No. 18 in the latest Women’s Basketball Coaches Association (WBCA) Division III poll that was released on December 17th, and received seven votes in the latest D3hoops.com poll that was released a day before on December 16th.

Albright’s December began with convincing MAC Commonwealth road wins over Arcadia and Lebanon Valley before being followed up with an 81-50 win over Hood at home on December 14th. The Lions defeated Moravian on the road, 69-54, two days later on December 16th which snapped a two-game skid in the series with the Greyhounds. Albright capped the month with an impressive 82-65 win over King’s at home on December 19th.

Luck, the winningest coach in Albright women’s basketball program history, earns this accolade for the first time in her coaching career.

Albright will return to action on Saturday, January 4th in conference play by hosting Stevenson at 1 p.m.